Vitaliy Lytvyn / Stories from a Travelling Bard – The Kobzar Illustrated 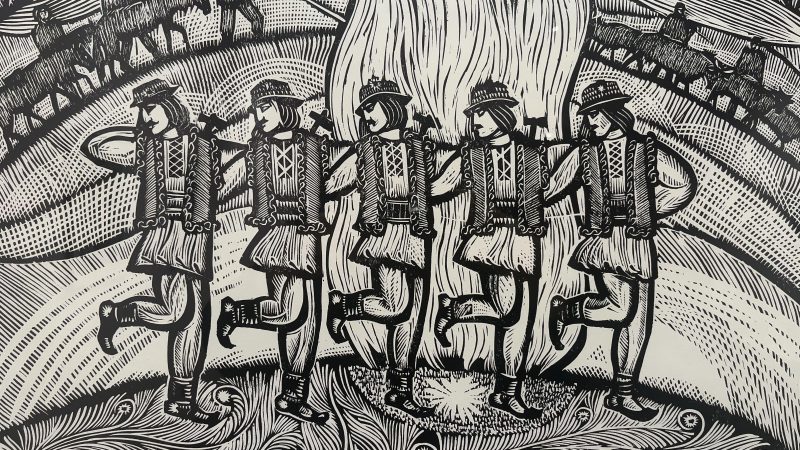 The striking woodcut prints in Vitaliy Lytvyn / Stories from a Travelling Bard – The Kobzar Illustrated are drawn from the Ukrainian Museum of Canada’s permanent collection, many of which have not been presented in Saskatoon before now. Each print references a scene or passage from poet Taras Shevchenko’s Kobzar (Кобзар), an epic book of verse celebrating Ukrainian folk culture. Kobzar is a Ukrainian word for a traveling poet or bard. Taras Shevchenko (1814-1861), often referred to as Kobzar Taras, or simply Kobzar, was a Ukrainian poet, writer, artist, public and political figure, folklorist and ethnographer whose literary outputs are regarded as the foundation of modern Ukrainian literature. Born a serf under the Russian Empire, he began writing poetry while still a serf, and Kobzar was his first publication. Throughout his life, Shevchenko was dedicated to the political liberalization of Europe and the freeing of Ukraine from Russia’s rule.

About the artist:
Vitaliy Lytvyn (1937-1998) was born in Radyslavka, Ukraine. After graduating from the Lviv Institute of Decorative Arts, Lytvyn pursued a career as an interior and exterior designer in Ukraine while studying a variety of artistic mediums, including woodcutting. He immigrated to Mississauga, Canada in 1980 and exhibited his work extensively throughout North America during his life. An enthusiastic proponent of childhood education and Ukrainian heritage education, Lytvyn founded an art school in Toronto for Ukrainian-Canadian children. The black and white woodblock prints that Lytvyn produced are typical of Ukrainian printmaking. The oldest form of printmaking, woodcut is a relief process in which knives and other tools are used to carve a design into the surface of a wooden block. The raised areas that remain after the block has been cut are inked and printed, while the recessed areas that are cut away do not retain ink and remain blank in the final print.