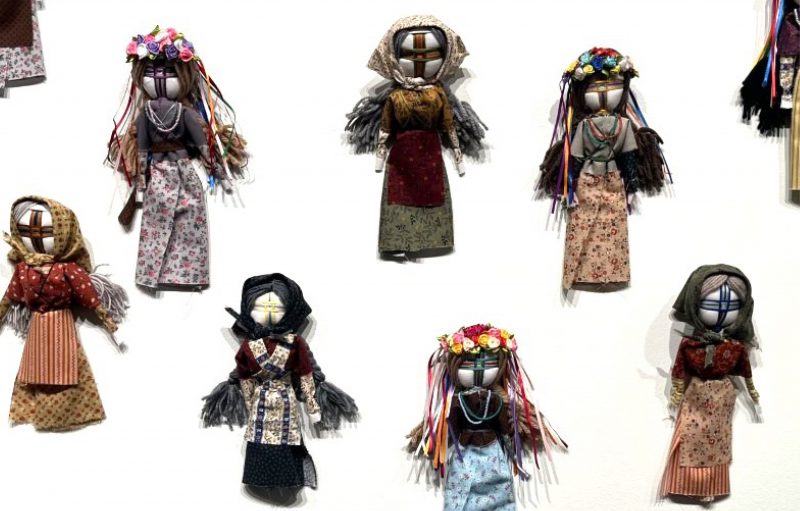 This exhibition honours the contributions and actions of Ukrainian women since the Russian attack on Ukraine began on February 24, 2022.

Motankas (Мотанка) are ancient Ukrainian talismans believed to embody female spirit and power. They are a channel for the continuous connection between generations of family – past, living, and unborn – and they symbolize goodness, prosperity, and hope. A Motanka placed in a home is believed to protect the family, absorbing diseases and safeguarding the household’s inhabitants from evil spirits.

The 5,000-year-old tradition of Motanka mirrors the ongoing resolve of Ukrainian women to defend and protect their families and homes, ensuring the survival of Ukrainian culture and ethnicity. The 100 Motankas in this installation reference the ancient Roman military units called centuria, which were known for their tactics, bravery, and determination.

When the Russian army first crossed the eastern border of Ukraine to conduct a “special military operation”, many predicted Ukraine would fall to the superior military power. It soon became evident that the will of the Ukrainian army and citizens had been underestimated.

Women and children were mobilized to evacuate their homeland. But many women chose to stay. These women came together as they would for a book club or making pysanky, but instead they made Molotov cocktails and took up arms.

About the Artist:
Bonnie Conly is a professional visual artist with Ukrainian ancestry. She has lived most of her life in Saskatchewan on Treaty 6 territory. Her work investigates themes of place, identity, and immigration. Geography, history, and myth telling are an integral part of her visual practice. Conly received an honours B.A. in Art Studio and Art History with high honours from the University of Saskatchewan.