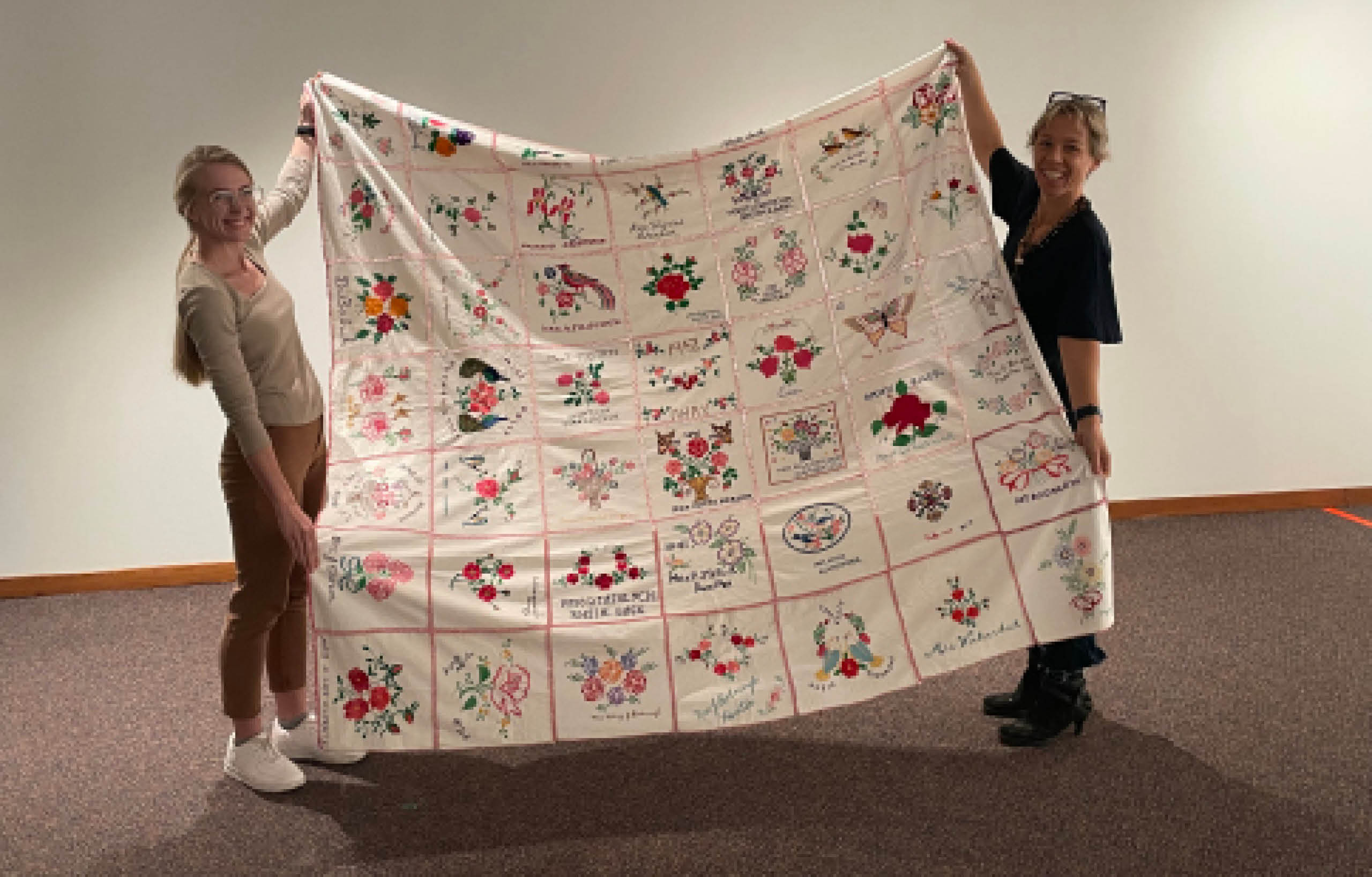 The Ukrainian Museum of Canada continues to receive valuable donations of artefacts and artworks from individuals and organizations in the Ukrainian community in Canada. We are grateful to everyone who has donated to the Museum in recent years. For this reason, we are thrilled to announce that in Summer 2023 we will showcase some of our new acquisitions in an exhibition.

Here we offer you a sneak peak of two recent donations: Yorkton, Saskatchewan-area community quilt, donated by Tracy Perrault, granddaughter of William (Wasyl) and Anne Wlasichuk (nee Andrychuk), who emigrated to Saskatchewan from Kitsman, Bukovyna. This unique embroidered quilt composed of 49 hand-stitched squares was made in 1941-42 by Ukrainian women living in and around Yorkton, SK, including the communities of Veregin, Dnieper, and Rhein.

The women who contributed to this quilt all enjoyed embroidery, often doing their handiwork by the light of kerosine lamps in the long, dark evenings of winter. Perrault’s grandmother’s quilt is one of many such made by communities of women in those days. They would mail squares to each other; recipients would personalize their squares with their own embroidery and then return the squares to the sender, who would stitch the squares together.

We are grateful to Perrault, who lives in Ottawa, ON, for bringing us her grandmother’s quilt. It is a beautiful example of the history of community amongst Ukrainian Canadian women, and the ways that traditional Ukrainian handiwork was adapted to meet changing social and environmental needs in a new land. Perrault also published a story about this quilt in the December 2022/January 2023 of Our Canada, a Reader’s Digest magazine.

The Museum was also honoured to receive a selection of limited-edition prints from Richard Johnson’s exhibition “On Guard for Thee”, depicting Operation Unifier – Canada’s Military training mission to Ukraine, which took place at the International Centre for Peacekeeping and Security in Yavoriv, 25 April 2015 to 13 February 2022. Canadian troops involved in the mission were drawn from the 1st Battalion of the Royal Canadian Regiment and he 3ième Battalion, Royal 22e Régiment from Québec. Under their tutelage, a total of 33,346 Ukrainian soldiers were mentored.

Richard Johnson, a field illustrator attached to Canada’s Armed Forces as part of the Canadian Forces Art Program, went to Ukraine during the inaugural phase of Canada’s mission there to chronicle the lives and routines of the vigilant Canadian instructors and the attentive Ukrainian volunteers.

This gift, which depicts Canada’s contribution to Ukraine during a period of great need and urgency is especially poignant in this time of war.

Richard Johnson is an illustrator and journalist who has worked for the National Post, Washington Post, and Detroit Free Press. His work is held by the Canadian War Museum, Smithsonian National Museum of American History, and the US National Museum of the Marine Corps.